If I Made The Movie Soundtrack For... NIGHT SCHOOL 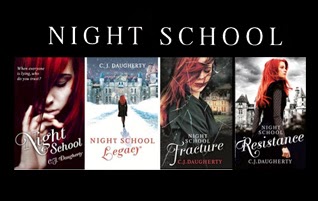 I should be writing my write-up on me finishing my reread of Harry Potter and the Philosopher's Stone. Or my review of Young Avengers: Style > Substance. But I can't seem to get into the mindset to write them. So, I thought I would do this, my first blog post under my "If I Made The Movie Soundtrack For..." trial.

I was going to do Broken by AE Rought first. That was always the plan. Leave this one till last so it doesn't clash with the Night School: Web Series (What do you mean you haven't watched it? Go to https://www.youtube.com/user/nightschoolbook - the last episode should be up this Friday so you can blitz them now!).

But I like the idea of doing a soundtrack for this series as a whole. I usually have a song for each book, so I went "Ok, if this was turned into a TV show or a movie, what music would I have?". The trouble with this was I wanted foreboding songs - songs that hint at the danger to come - and not one song with this feel came to me. It was a NIGHTMARE! However, a new idea popped into my head. What songs would be on these characters's iPod?

Now, before the Night School fandom corrects me, I know Cimmeria Academy has a strict no technology code, but I thought "If Allie can't get an iPod in the school, surely Jo or Katie will". And then, the songs came. Sod the movie, what would the character's LISTEN to! And they were fun songs. Songs I could twist on their heads. That's when I got excited. Very excited. That's never a good thing with me...

Now, my attention for this soundtrack is that, while we have a good mix of songs - songs that have been written especially for this movie/TV show or been remixed with Night School in mind, I want a few songs that we, the viewer, know and go "Hey! They have the same taste in music as me!" while not distracting us from the story. So... I decided to pick a few songs from my weirdly long list and show you my idea for this soundtrack. I hope you like...


"WHERE IS THE LIGHT" by The Amplifetes
Bad Allie. The Allie we meet in the first chapter of the first book. So this would be playing over the first scenes when Allie and Mark is trashing the school and when Allie hides (and gets locked into the closet), the music will stop. We will hear only Allie's breathing and then her panic. It's a complete 180 to have this powerful song to show us this strong, badass Allie then have it stop and show us a completely different side of her.


"STOMPA" by Serena Ryder
Another Bad Allie song, but it's not as harsh as Where Is The Light. I can imagine Allie using this song on her drive to Cimmeria Academy, trying to remind herself of who she is and remembering her brother. But I can imagine a few other series, mainly with Jo or Rachel.


"DON'T STOP ME NOW" by Foxes
I have no idea why but this song instantly made me think of Isabelle. I can imagine this version of Queen playing in Isabelle's office when Allie first enters her office. I, for some reason, imagine Isabelle being a fan of jazz and, if we can only make a version of this song more 1920 smokey jazz-bar sounding, it would be perfect for her.


"COME BACK HOME" by Two Door Cinema Club
I listened to this song a lot when I read the first book. While it sounds all electronic and fun, I always felt there was a dark undertone to it, something that fits perfectly with Night School. I can easily imagine Allie relating this song to what she remembers of Christopher, her brother. Or what she think she remembers of him...


"SPEAK UP" by POP ETC
There is something haunting about this song that I can't put my finger on. Plus, I love a good hint of foreshadowing and I feel that this is hints to Carter and Jo.


"VULTURES (MJ COLE REMIX)" by Jess Mills
I only discovered this a few weeks ago when I researched another song from one of my current TV addictions (How To Get Away With Murder) and I found this by mistake. But this song I feel is perfect! I can imagine this being Allie's investigating music, trying to figure out the secrets of Night School...


"BOYS DON'T CRY" by Natalia Kills
I just wanted a bitchy, poppy song for Katie. Only reason why I picked this one. I can imagine Katie playing this to herself before going to a party... And, if memory serves me right, Cimmeria Academy has a far few parties...


"COVER MY EYES" by La Roux
Ok, this is an add-on! I just thought of foreshadowing and, as we have teens and hormones working overtime (and THAT love triangle. If you want to call it that), I wanted to hint at a future event with Allie, Carter and Katie.


"LEAVE WHILE I'M NOT LOOKING" by Paloma Faith
Last song but the ending of Night School: Legacy with Jo. This is Jo's song. It was as soon as I discovered it. (For some reason, I merged the endings of the first and second books together just so I can get this song on this playlist...)

Ok, that was far more songs that I was expecting and that was FAR MORE FUN than I was expecting! Am kinda glad I did this post first as it was fun! I love writing fun blog posts (and I sense when I write the "If I Made The Movie Soundtrack For..." posts for AE Rought's Broken and Patrick Ness's A Monster Calls, they are going to be a tad more strict).

But I hope you all like the music. Tell me what you thought of my choices and what songs would you pick if you were in charge of the movie/TV show's soundtrack? I want to discover new songs and rediscover some classics!
Posted by Pewter Wolf at 21:48:00

Email ThisBlogThis!Share to TwitterShare to FacebookShare to Pinterest
Labels: C J Daugherty, If I Made The Movie Soundtrack For..., Night School