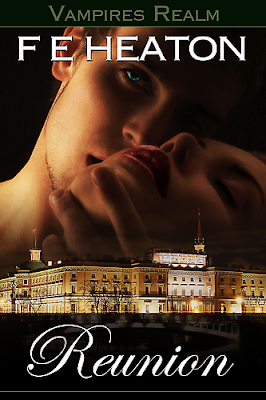 After reading the amazing Tiger's Curse and wanting some fast to read to past the time till I can get my heands on its sequel, Tiger's Quest or whatever I decide to read next (got no idea at the moment), Sarah from Feeling Fictional tweeted about a free ebook and, seeing as I want to test out my Kindle with some fun stuff from authors I've never read before, I downloaded Reunion and started skimming through it.

After becoming the Law Keeper for the Venia bloodline, Marise doesn’t want to return home but duty returns her to investigate the attempt on her lord’s life. But after she discovers that her only source of information is a guard who was mortally wounded during the attack, a guard who turns out to be the man who broke her heart fifty years ago...

Reunion is, as I have just discovered, the 6th book in the Vampire Realms (a paranormal romantic serie)s so there were one or two things that were touched upon that happened in the previous books within the series.

This was a fast and slightly fun read (with one sexy scene which took up one whole chapter out of the eight), but it still had its moments of "Hang on, what?"

One of the problems I had was this was there were times I wondered which this book was. A vampire story or a romantic story. Because it never felt like it made up its mind one way or the other. I felt that the two sides of this story never mixed together well.

But seeing as I got this free, I'm not seeing this as a bad thing as I had low standards. It was a fast read, but nothing exciting. So, middle of the road for me...
Posted by Pewter Wolf at 14:24:00