This morning, I put a quick post up on the lovely newly-revealed covers of Lisa McMann and Kimberly Derting's novels, DEAD TO YOU and THE LAST ECHO, respectively.

Not wanting to miss out on the action, Cat Clarke revealed the cover for her second novel, TORN, on her blog. And this is it: 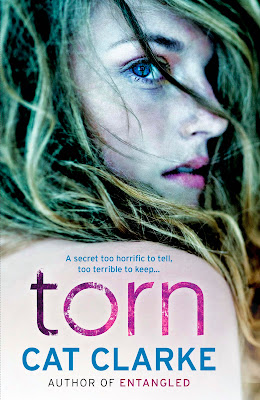 It's very similar to her previous cover, ENTANGLED. But it's very blue washed. It similar and yet different. It's growing on me. I love how both covers have the one eye and the mess of hair.

Oh, for those of you who don't know much about this book, here's the blurb from Cat Clarke's website:

The most popular girl in school is dead. Everyone thinks they know the score, but only Alice and her friends know what really happened to golden girl Tara. But Alice starts to doubt her own version of events when, haunted by visions of Tara, she realizes the truth is much, much darker. And she's the only one who wants to uncover it.

But what do you think of this cover? Do you like or dislike the cover? Reactions, please.
Posted by Pewter Wolf at 17:06:00