GoodRead - What To Do When Someone Dies (Audiobook) 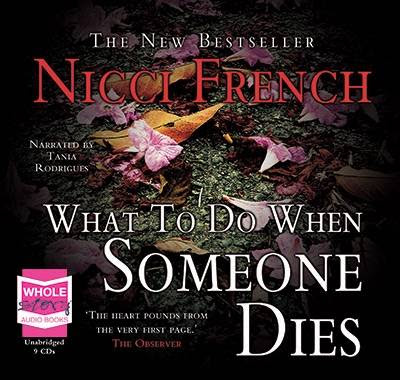 When Ellie is told that her husband, Greg, has died in a terrible car accident, she can't believe it. Nor can she believe that there was a woman in the car with him when it drove off the road and burst into flames. She wasn't anyone from the office so who was she? And what was she doing in Greg's car? And why was Greg at that part of London in the first place? It makes no sense!

I downloaded this on a impulse after hearing the teaser for it on iTunes and on Audible.co.uk and thought "A crime story about grief. Should be dark and interesting."

Oh, how wrong I was.

Ok, I hate writing bad reviews and this isn't really a bad review. It's one of those reviews where I can see more bad points than good. And this is my first Nicci French story to investigate - I know there are better out there like Secret Smile or The Safe House, but this was a audiobook and sounded interesting.

It was a slow paced story about a woman slowly coming to terms with the death of her husband and facing the possible that he wasn't completely in love with her. That I liked. The slow wondering of it all. And once the story got its rear in gear (about the last 4 hours of the ten hour audiobook), it seemed to hold my attention more.

But at the start of the story… once we get over the first few chapters, it's seems a bit odd. The main character Ellie is in shock and grieving, I get that, but it just becomes hard work to connect to her and her grief. A character later on in the story said "you don't make it easy for people to help you." and this is true. How are we meant to relate and sympathise with Ellie if she was such hard work?

And there were a few situations which happened to Ellie and I thought "Oh, this isn't going to end well", and in these cases, I shouldn't have thought of that. I should have thought "Don't do it, you stupid woman!" and worried about her safety. But I didn't. I guess in this part of the story, I should have gone "is she going mad?" And I think that's how the story should have been portrayed. Not as a crime thriller, but a thriller on paranoia. And they could have, on so many occasions, made us question Ellie's sanity. If they did, it kinda fell flat. 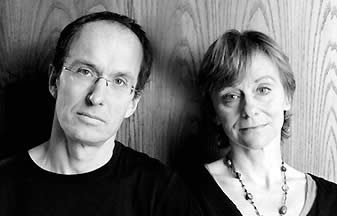 But the main problem with this, and I'm pretty sure I have stated this in the past, is the reader of the audiobook. You can have one of three readers. One that you instantly click with, the second where his/her voice grows on you as the story slowly unfolds or the reader that you don't like listening to. Tania Rodrigues, the reader for this audiobook, fell into the third section because she sounded BORED OUT OF HER MIND! If this is her portraying grief, then it didn't work! I have gone through grief and I never sounded bored out of my skull. But she did and because of this tone, I couldn't relate to her. It was hard work to sit and enjoy her voice.

So, as a whole, not really a fan of this audiobook. Next time, if I do return to Nicci French, maybe I will try one of their (Nicci French is a husband-wife duo) earlier novels.
Posted by Pewter Wolf at 16:39:00

Email ThisBlogThis!Share to TwitterShare to FacebookShare to Pinterest
Labels: Audiobooks, GoodRead, Nicci French, reading, review, What To Do When Someone Dies