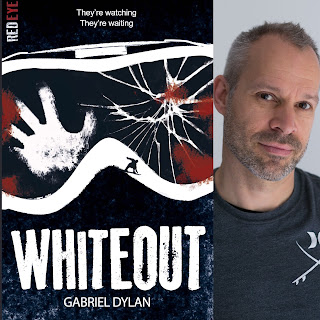 SURPRISE!!! It's my stop on the mysterious Whiteout blog tour and the Pewter Wolf is thrilled to welcome Gabriel Dylan to the blog.

For those of you not in the know, Gabriel Dylan is the author of the new RedEye title, Whiteout. Charlie is hoping this school ski trip will distract him from his home life. But when at the ski resort he and his fellow classmates get stuck due to a freak snow storm and get cut off from the rest of the world, they get the feeling that there's something outside. Something old, and something evil...

Only the ski instructor, Hanna, has any idea what might be out there. But should Charlie and his classmates trust her...

To celebrate the release of this chill-fest, Gabriel has written a small list fo his top 5 teen ensembles in movies. And I think some of these choices might surprise you... Well, they surprised me, and I got to read this before this post went live!

Now, before I hand you over to Gabriel, I just want to thank him for finding time to write this post. I know he's a busy man (you'll see why in the second paragraph he wrote) and I want to thank Charlie from Stripes for asking if I want to be involved!

Also, if you want to check Gabriel out online (which you should), you can go to his website at https://gabrieldylan72.wixsite.com/mysite or check out his Twitter at @GabrielDylanYA.

Strap in and let's ski/snowboard down this slope and see Gabriel's chart before the storm kicks in!


As much as I love a good horror story, for me to really care about what happens in the story I have to be invested in the characters, so I’m really on the edge of my seat when they find themselves in danger. And when I set out to write Whiteout, I wanted people to connect with the characters I’d invented, and find themselves rooting for their survival, and having that emotional attachment.
My day job helped me a lot with characterisation – running a busy sixth form and teaching English across the school exposes me to a huge range of students, and gives me an awareness of the cliques and groups that hang around the halls and common rooms, and how they interact with each other. And I think there’s nothing more interesting than when you get a cross section of these characters together, and put them in a situation that forces them to have to co operate, and mix with people they neither like nor understand. And whilst my day job helped with this element of crafting Whiteout, a love of teen films, and particularly teen ensembles and coming of age movies, gave me an idea of exactly what kind of characters I wanted to trap in the snowy Austrian mountains.

So, in rank order, here are my top 5 teen ensemble films: 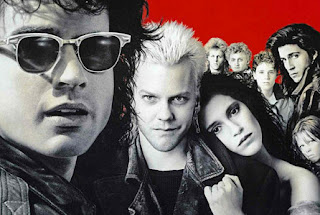 I remember seeing this as a teenager, and not only loving the vampire aspect, but also thinking the group dynamic between the main characters was really well done – super cool Michael, curious Sam, beautiful, mysterious Star, and the two crazy Frog brothers. And of course, the Lost Boys of the title, a group of punky vampires who never grow old, led by Kiefer Sutherland’s magnetic David. Although most of the cast were relatively unknown upon its release, the film rocketed all of them into stardom, and turned the film into a cult classic. Their chemistry, and the way their small group took on the vampires preying on the town, was one of the first ensemble films that really struck a chord with me. 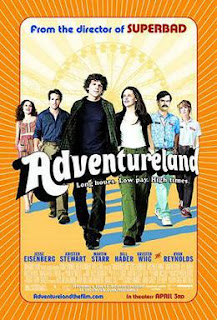 Adventureland is a much more recent film, but it’s one that I thought had real heart and gave a different slant on the coming of age trope. When teenager James is told that his parents can no longer financially support his planned college course, he has no choice to get a job on the games stalls at the eponymous funfair. Through this, he meets the motley group of waifs and strays that work at the park. Sarcastic Joel; crazy Frigo; the alluring Lisa P.; the park's technician, Mike Connell, a part-time musician; and the haunted Em, who James starts to fall for, but who also hides a secret of her own. The interplay between the main set of characters feels fresh and original, and the story is heartfelt, funny, and often poignant, all that a coming of age tale should be. Plus it reminded me of hanging out at the parks in Cornwall that my friends worked at when I was younger, and the weird and wonderful characters that hung out there.

Number 3: Stand By Me 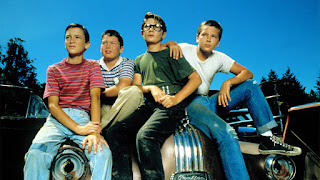 River Phoenix is still one of my absolute favourite actors, and I vividly remember the night I heard that he’d passed away. I was in a car with all my friends, driving to one Halloween party or another, and my friend Richie turned up the radio when he heard the news (this was before internet and mobile phones). Phoenix had overdosed in an LA club, and we were all in shock at the passing of such a talented young man, one only a few years older than us. I’d seen most of his films, like Running On Empty and The Mosquito Coast, but I first noticed what an amazing actor he was in Stand By Me. Adapted from the Stephen King short story The Body, Stand By Me tells the tale of a group of kids who hear rumours of a dead body, lying out in the woods, and decide to head along the train tracks to see the corpse for themselves. As hilarious as it is heartbeaking, each of the kids has their own tragic backstory, and their interplay delivers much of the film’s magic, but it’s Phoenix’s performance and character, Chris, that really stands out. Chris comes from from a family of outlaws and drunks, and he’s desperate to defy expectation, escape the small town, and make something of himself. The final scene, where the grown up narrator Gordy reveals what happened to the kids in adulthood, is incredibly powerful and even now I find the last few lines an absolute gut punch. 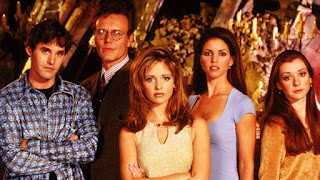 Yeah, I know, I’m cheating here, and this isn’t a film, it’s a TV show, but I can’t talk about the world of teen ensembles without touching upon one of the greatest mismatch of characters ever put together. I’m sure that I wasn’t the only person in the 90’s that found themselves wanting to be a student at Sunnydale High, vampires or no, just so I could find myself a group of friends like ordinary Xander, kooky Willow, brave Buffy, spoilt Cordelia, rocker Oz, and the rest of the Scooby Gang. There was something here for everyone, and the chemistry between the ever changing group was the highlight of the programme for me, although if I had to choose, my favourite character over the course of the show’s seven seasons would be reformed vengeance demon Anya, with her social awkwardness and fear of rabbits. Buffy definitely had an influence on my writing, and not just the vampire aspect! 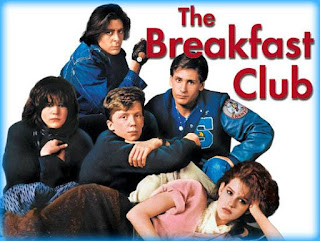 I don’t think there’s any surprises here, but in terms of teen ensembles, for me this film is as good as it gets. The Breakfast Club was a major influence on Whiteout and the kind of interplay I wanted to create between the key characters whilst they struggle to stay alive. Whilst the idea of an all day Saturday detention sounds like an odd premise for a film, when the five detainees – ‘a beauty, a jock, a brain, a recluse, and a rebel’ - find themselves thrown together, they question the nature of stereotypes, and find that they have a lot more in common than they thought. I saw this as a teenager, and I found myself watching it again and again, and loving the chemistry between the characters, as well as the 80’s soundtrack – horrifically I think at one point I actually adopted the hairstyle and fashion sense of the ‘rebel’ character John Bender – but let’s keep that to ourselves, shall we?

Which teen ensemble is your favourite?
Posted by Pewter Wolf at 07:30:00