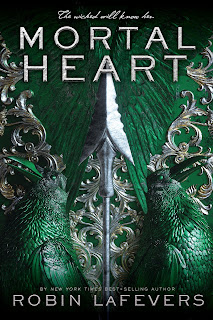 Day Three of our His Fair Assassin Mood Board Week and it's Mortal Heart. Out of the original His Fair Assassin trilogy, this was probably one of the hardest to create as, while I had a good idea of Grave Mercy and Dark Triumph, I don't know much about Mortal Heart, so I had to trust the book's synopsis far more than I would have liked.

But I am quite happy with what I created...

Annith has watched her gifted sisters at the convent come and go, carrying out their dark dealings in the name of St. Mortain, patiently awaiting her own turn to serve Death. But her worst fears are realized when she discovers she is being groomed by the abbess as a Seeress, to be forever sequestered in the rock and stone womb of the convent. Feeling sorely betrayed, Annith decides to strike out on her own.

She has spent her whole life training to be an assassin. Just because the convent has changed its mind doesn't mean she has. 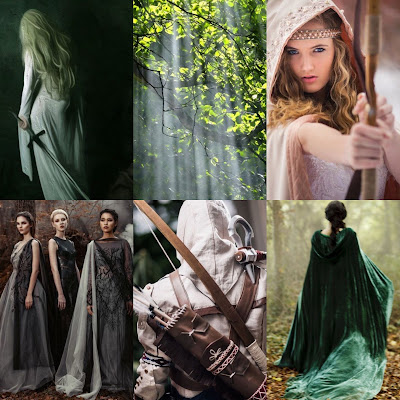 I warned you on Tuesday that this was going to be green. And that was the main thing I wanted - something green and something very (and at the same time, very anti) Robin Hood. My fave pic on my mood board is the bottom left - the three women. I don't know why but I get the feeling/the hope that the three female leads from Grave Mercy, Dark Triumph and Mortal Heart will, for some reason, meet up and join forces...

Until I read the series, I can't know for sure...

Now, I have one more mood board to do. Tomorrow, we are all entering unknown territory and going into the new book by Robin LaFevers, set in the His Fair Assassin world but is the start of a new duology, Courting Darkness. Am a mix of excited and a little nervous. So, come back tomorrow and we shall see what we can find!
Posted by Pewter Wolf at 08:00:00