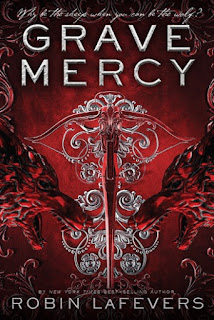 As I told you guys know, I am planning to read His Fair Assassin trilogy by Robin LaFevers and the first book in its companion spinoff, Courting Darkness due to the cover reissuing (Aren't they pretty?). Well, when I was chatting to Layla at Andersen about this, she and I started chatting about ways to give this series some more attention and I said "I love the idea of a mood board. Plus, only read the first years ago so it would be fun to do them based on the synopsis. Plus, fits in with my Year of Blood and Magic as... well... murder and blood!" And Layla said "That sounds weird. I like it! Go for it!"

So, here I am. And because I don't want to do a review this month, this whole week will be mood board on assassin nuns (barring Wednesday. Even I need a break!)

Now, the plan is that am going to show you the book's synopsis, stupid affiliate links where you can buy them and then show you the mood board and chat about where my brain where with it...

So, let's get this blood-party start!

Why be the sheep, when you can be the wolf?

Seventeen-year-old Ismae escapes from the brutality of an arranged marriage into the sanctuary of the convent of St. Mortain, where the sisters still serve the gods of old. Here she learns that the god of Death Himself has blessed her with dangerous gifts—and a violent destiny. If she chooses to stay at the convent, she will be trained as an assassin and serve as a handmaiden to Death. To claim her new life, she must destroy the lives of others.

Ismae’s most important assignment takes her straight into the high court of Brittany—where she finds herself woefully under prepared—not only for the deadly games of intrigue and treason, but for the impossible choices she must make. For how can she deliver Death’s vengeance upon a target who, against her will, has stolen her heart? 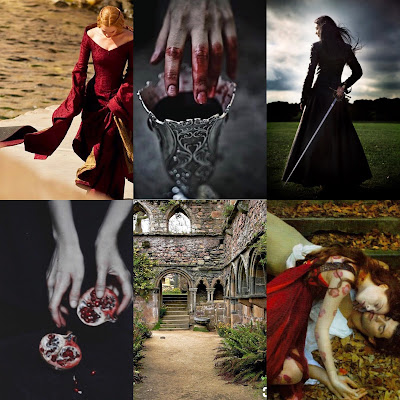 The only thing about this mood board that's wrong is I couldn't find a cool picture of a crossbow, like what's used on the cover! But, I remember this book have a lot of poisons, hence the wine and the pomegranate. Also, red is quite important - yes, it's on the cover, but there's something about an assassin wearing red that catching my eye...

I don't want to go too much further into the mood board, but it was a fun to make this! Onto making tomorrow's mood board for Dark Triumph, which is a fan fave within the series so NO PRESSURE!!!
Posted by Pewter Wolf at 08:00:00