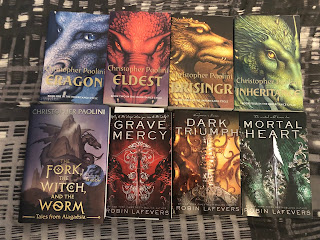 You know in my "The Year of Blood and Magic Begins..." post last week, I said that I had no rules for this. Well, it's kinda true and it isn't. You see, I had an idea of trying to read one series throughout the course of 2019. And that was the plan I was sticking to... but then another series caught my attention and I decided to add that series to my year-long reading.

So, I have two series I am going to try and read throughout 2019, each tackling one side of my "Blood and Magic" and I wanted to let you know so, if you fancy joining along with me, you are more than welcome...

So, what are the two series in question? Well, they are the Inheritance Cycle by Christopher Paolini and His Fair Assassin by Robin LaFevers.

And the reasons for these two series (as well as a few other books am keeping on the down low for now...): Here There Be Dragons and Badass Nun Assassins!

Ok, there is more to them than that. Of course there is. I have, in fact, read the first book in each series - Eragon and Grave Mercy - many years ago. One was before the blog and I remember wanting to continue the series, but the size of them scared the ho-ha out of me! The other was when I did have the blog and, while I did like it, I wasn't that big a reader of the genre it was set in and found it quite slow. But I have changed as a reader and I love a good, slow burn...

Plus, let me say this again: DRAGONS AND KILLER NUNS! How can I possibly sell these two series to you more?!

Ok, maybe I need to sell these two series more... Ok, let's me copy the synopsis of Eragon and Grave Mercy on here for you to read. (Both of these are from Goodreads. Will put links in for you


When Eragon finds a polished stone in the forest, he thinks it is the lucky discovery of a poor farm boy; perhaps it will buy his family meat for the winter. But when the stone brings a dragon hatchling, Eragon soon realizes he has stumbled upon a legacy nearly as old as the Empire itself. Overnight his simple life is shattered and he is thrust into a perilous new world of destiny, magic and power. With only an ancient sword and the advice of an old storyteller for guidance, Eragon and the fledgling dragon must navigate the dangerous terrain and dark enemies of an Empire ruled by a king whose evil knows no bounds. Can Eragon take up the mantle of the legendary Dragon Riders? The fate of the Empire may rest in his hands. (Goodreads Link to Eragon)


Why be the sheep, when you can be the wolf?

Seventeen-year-old Ismae escapes from the brutality of an arranged marriage into the sanctuary of the convent of St. Mortain, where the sisters still serve the gods of old. Here she learns that the god of Death Himself has blessed her with dangerous gifts—and a violent destiny. If she chooses to stay at the convent, she will be trained as an assassin and serve as a handmaiden to Death. To claim her new life, she must destroy the lives of others.

Ismae’s most important assignment takes her straight into the high court of Brittany—where she finds herself woefully under prepared—not only for the deadly games of intrigue and treason, but for the impossible choices she must make. For how can she deliver Death’s vengeance upon a target who, against her will, has stolen her heart?
(Goodreads Link to Grave Mercy)

So, I have eight novels to read for both series - Eragon, Eldest, Brisingr and Inheritance for the Inheritance Cycle and Grave Mercy, Dark Triumph, Mortal Heart and Courting Darkness for His Fair Assassin and its spinoff. Plus I have a collection of short stories set in the Eragon world - The Fork, The Witch and the Worm.

Have I bitten off more than I can chew? Probably. But I am going to try. I do hope you come along with me while I read these badass novels! (And if you wanna buy a copy, go to the affiliates on the side or visit your library! This is gonna be fun!)
Posted by Pewter Wolf at 08:00:00