The Fork, The Witch and the Worm 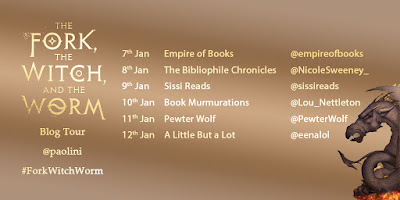 Like I told you guys earlier this week, I'm planning on reading two series this years. The first is His Fair Assassin series by Robin LaFevers. The second is the Inheritance Cycle by Christopher Paolini. It's one of those series I read YEARS ago (ten? Twelve?) when the first book, Eragon, came out and loved, but got scared of the sequels due to length.

Anyway, when I decided to try and return to this world, the collection of short stories set after the fourth and final book, Inheritance, was announced so I need I was going to add to my reading without even thinking about. So, when the lovely Sian at ED PR asked if I would be involved in this blog tour to celebrate The Fork, The Witch and the Worm, I jumped at the chance.

Acting as both an entry point for new readers and loving return to fans, this collection takes place a year after the events of Inheritance, Eragon is struggling with find a new home for the dragons and riders while coping with a never-ending sea of tasks. But a vision, a surprise visitors and an exciting legend gives Eragon the distraction and new perspective Eragon needs...

I am currently reading this collection of three stories at time of writing this post and I am having a blast and can't wait to return to this world in the coming months. So, to share my excitement, I have a small extract to share with you!

Now, before I hand you to the extract, I want to thank Sian at ED PR for asking me to be involved in this tour. Super kind of you and a great way to kickstart my Year of Blood and Magic reading! And, if you want to know more about Christopher Paolini and the world of Alagaësia, you can check out paolini.net or say hi to him on Twitter at @paolini (Also say hi to his sister, Angela, on Twitter at @Angela_Paolini as she is not only the inspiration behind beloved character in series, Angela the herbalist [who my extract is about! SO EXTRA LOVE PLEASE AND THANK YOU!] by also wrote  within the collection. But where you ask? I'm not going to kiss and tell. A dragon would kill for less...)

RIGHT, ONTO THE EXTRACT! 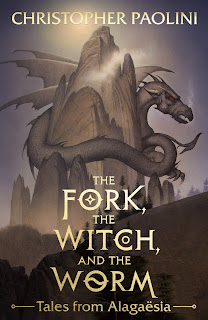 Eragon stared across his desk at Angela the herbalist, studying her.

She was sitting in the dark pinewood chair the elves had sung for him, still clad in her furs and travel cloak. Flakes of melted snow beaded the tips of the rabbit-hair trim, bright and shiny by the light of the lanterns.

On the floor next to the herbalist lay the werecat, Solembum, in his feline form, licking himself dry. His tongue rasped loudly against his shaggy coat.

Billows of snow swirled past the open windows of the eyrie, blocking the view. Some slipped in and dusted the sills, but for the most part, the wards Eragon had set kept out the snow and cold.

The storm had settled on Mount Arngor two days past, and it still showed no signs of letting up. Nor was it the first. Winter on the eastern plains had been far harsher than Eragon expected. Something to do with the effects of the Beor Mountains on the weather, he suspected.

Angela and Solembum had arrived with the latest batch of traders: a group of bedraggled humans, travel-worn and half frozen to death. Accompanying the herbalist had also been the dragon-marked child Elva—she who carried the curse of self-sacrifice Eragon had inadvertently laid upon her. A curse instead of a blessing, and every time he saw her, he still felt a sense of responsibility.

They’d left the girl on the lower levels, eating with the dwarves. She’d grown since Eragon had last seen her, and now she looked to be nearly ten, which was at least six years in advance of her actual age.

“Now then, where’s the clutch of bouncing baby dragons I was expecting?” said Angela. She pulled off her mittens and then folded her hands over her knee and matched his gaze. “Or have they still not hatched?”

Eragon resisted the urge to grimace. “No. The main part of the hold is far from finished— as you’ve seen—and stores are tight. To quote Glaedr, the eggs have already waited for a hundred years; they can wait one more winter.”

“Mmm, he might be right. Be careful of waiting too long, though, Argetlam. The future belongs to those who seize it. What about Saphira, then?”

“Has she laid any eggs?”

Eragon shifted, uncomfortable. The truth was Saphira hadn’t, not yet, but he didn’t want to admit as much. The information felt too personal to share. “If you’re so interested, you should ask her yourself.”

The Fork, The Witch and The Worm by Christopher Paolini is published by Penguin Random House Children’s and is out now.
Posted by Pewter Wolf at 08:00:00